A Historic Moment! Embassy of Israel in London hosts an Eid Reception

Embassy of Israel in London where politicians, religious and community leaders got together. This took place on Wednesday the 13th of July.

This was a major step towards the peace process taken by the Israeli Embassy; His Excellency Mark Regev (Israel UK’s Ambassador), Rony Yedida-Clein (Diplomacy Officer),

Shai Masot (Senior Political Officer), Rabbi Herschel Gluck OBE and all the other staff members of the Israeli embassy gave a warm welcome to all.

The hospitality was great with soft drinks and a lovely meal making everyone feel at home.

HE Mark Regev gave a great speech speaking about the similarities shared by the Jews and the Muslims such as family values and looking after the adults at home, etc.

He said that all the people of Israel should be treated as one and there all the holy places of the Muslims or any other faiths should be maintained, respected and peace should prevail.

Lord Sheikh the president of the Conservative Muslim Forum gave a great speech too, saying that the Jews and Muslims shared a lot of similarities. He said when he first came to the UK

they could not find Halal meat and his mother asked him to fetch Kosher meat to eat. He raised the issue of concerns in Gaza and requested the Ambassador to look into the matter.

Lord Sheikh, Lady Sheikh, Mr Mohammed Amin MBE, Mrs Tahara Amin, Mr Mike Mogul MBA were some of the CMF executives available at the reception. The Israeli Ambassador also confirmed that a survey was carried out in Israel and the majority of the Muslim’s living there were happy.

It was a lovely atmosphere at the Embassy and this is hopefully only the start of such a gathering.

Vic Sethi a businessman from Leicester was invited by the CMF and travelled specially to take part in the first ever historic Eid reception inside the Embassy of Israel in London.

“ There can be no gain without love, so this can be seen as a historic start of a Peaceful gathering in London at the Embassy of Israel. Hat’s off to them to start this and hopefully this can be a model which other countries can follow and convey the message of peace, humanity and harmony to the people of Israel and the Middle East.”

Vic is Sikh by faith was born in India, grew up in Kuwait and educated in convent school. He migrated to UK in 1991 during the invasion of Kuwait by Iraq in 1990. His parents are based in Kuwait still and he runs various family businesses in the UK. Vic has been appointed as the Cultural Ambassador to the Leicester Cathedral promoting the work of the Cathedral in communities. He is also a Chief Patron to Crimestopper’s and GNG Football Club of Leicester (est. 1969). 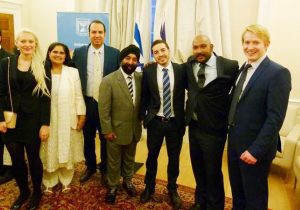 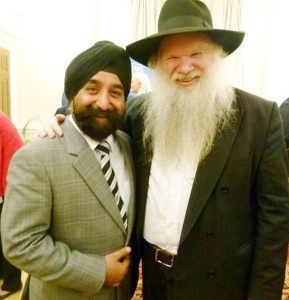 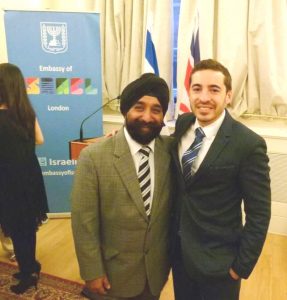