in the British Parliament 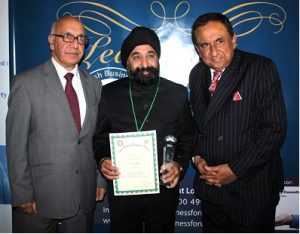 Leicester businessman Kulvinder S. Sethi also known to many as Vic Sethi was awarded the title of “Business and Humanitarian Entrepreneur of the Year 2013” award in the British Parliament on the Friday the 25th of October.

Vic Sethi was recognised for his family business success along with the contribution he makes to the community globally and his multi-cultural values.

The award was presented by Lord Sheikh to Vic Sethi along with Rt Hon Virendra Sarma. Among the guests present were Lord Karan Bilimoria (the founder and the chairman of the Cobra Beer) and Lord Navnit Dholakia.

“It is a great honour to receive such an prestigious award in the Palaces of Westminster and I would like to thank the IBBF, its management, the judges and the people who have nominated me for this award. I would like to congratulate my proud parents in the UK and Kuwait and all the family without who’s support this would have not have been possible, a big congratulations to all the team of Anand International and Daewoo International (Europe) for this achievement. This award belongs to all the people who I have mentioned and I am honoured to collect it on their behalf.”

“I would like to thank His Excellency Mr Khaled Al-Duwaisan, the ambassador to the Embassy of the State of Kuwait for his good luck wishes prior to me receiving the award and had wished me best of luck for the evening. My parents still reside in Kuwait and I am very grateful and thankful for the support The Kuwaiti government has given us, if it wasn’t to Kuwait I would have not been where I am today, so my loyalty will remain with Kuwait as I have spent most of my life in Kuwait” Says Vic

Vic is also currently a chief patron of the charity Crimestopper’s and sits on the national board. He has been on the board of the Prince’s Trust and still is passionate about them and supports them. Vic was also listed in the “Leicester’s Most Influential People” by Leicester Mercury.