Kulvinder Singh (Vic) Sethi was born in Delhi, grew up in Kuwait and migrated to the U.K. He runs successful family businesses, Anand International Ltd and Daewoo (International) Europe Ltd., which turn over in excess of $100m.

Vic’s parents migrated from New Delhi to Kuwait during the early seventies. Most of his father’s side of the family also migrated there. He went to school at the Carmel Convent School of Kuwait then was sent to London in the mid-eighties to study. On his return to Kuwait he joined a family business called Mohd Al Wazzan. The company specialised in selling PC components and custom building PCs in trade and retail.
In the late eighties, he set up another computer company in Kuwait, but it all came to a full stop on 2 August 1990 when Iraq invaded Kuwait. Vic says “It was the day I can never forget. While many took to the borders to escape, my family and I stayed behind to ensure our local Kuwaiti friends and their families were safe. I used to drive into their areas with my car loaded with Khubus (naan bread) and food for them.”
Today Vic Sethi runs a family business that was started up by his father-in-law Mr Anand in Leicester along with his brother in law. Vic’s parents and most of his family are still based in Kuwait.
Tell me about your current governmental links with Kuwait.
I’ve always maintained links with Kuwait and been an ally to the Kuwait Embassy in London. His Excellency Khaled Al-Duwaisan, the Ambassador for the State of Kuwait is a great personality and all the staff are very friendly. We regularly meet during the celebrations of the Kuwait Republic and of Liberation Day.

What are your impressions of Kuwait?
Kuwait is a small yet very powerful and wealthy state. It has always remained very low profile and has the strongest currency in the world. Even during the invasion, the Kuwaiti government in exile made sure that the currency maintained its strong position. There is a lot Kuwait offers to its residents and that is why many do not want to move out. It offers free medical support and is tax free. The people of Kuwait have always supported successful expatriates by making them business partners or offering them high posts such as general managers, etc. Kuwait also supports a number of charities nationally and internationally but keeps the work low profile. This includes educating children in undeveloped countries.

How do you feel about the current investment climate?

I encourage people to look into investing in Kuwait as there are opportunities. There is a new vision and plan for the coming years. Kuwait has opened its arms for people to invest in the country–it has been investing in Britain for decades. The Kuwait Investment Authority has more than doubled its investment
over the past 10 years to more than $24bn. At the end of 2013, the St Martin Property Corporation, which is controlled by the State of Kuwait, bought back a plot of land between Tooley Street and the River Thames in London that it sold 15 years ago. In 1983, the St Martin Property Corporation, which had turned the former Hay’s Wharf into London Bridge City that included the Cottons Centre and Hay’s Galleria, sold the undeveloped Eastern part of the site to London Bridge holdings, which was said to be around a 13-acre plot.
This plot was redeveloped to create the More London estate that consisted of offices, shops and buildings that included the Mayor of London and the London Assembly’s headquarters. Today More London is a great development of properties, a home to some of the wealthiest tenants from both private and public sectors. Reuters reported that St Martin Property Corporation paid approximately $2.4 billion for the estate, which means that the State of Kuwait is a permanent landlord to the seat of London’s government. HRH Sheikh Dr Meshaal Al-Jaber Al-Ahmed Al-Sabah, the Director General of Kuwait Direct Investment Promotion Authority told me that he is working on a 100% Foreign Direct Investment scheme where the 100% foreign direct investor in Kuwait will not require a sponsor, but will actually become an acting sponsor and bring in a workforce based on the type of business it is. This has never happened before.

What can you tell me about the thinking of the cabinet and His Highness the Emir of Kuwait?

Her Excellency Ms Hind Al-Sabeeh, The Minister of Social affairs and Labor and Minister for planning affairs and development recently highlighted some of the opportunities of the Emir’s Vision. I was present at an occasion when she said that Kuwait’s recipe for success is as follows: “We are citizens of a country of institutions functioning within a constitution to ensure our long existence. We are working towards upgrading our existing infrastructure to a world-class one. We are blessed by God with a visionary leadership and will to improve our country for all of its inhabitants.”

I encourage people to look into investing in Kuwait as there are opportunities. There is a new vision and plan for the coming years. Kuwait has opened its arms for people to invest in the country–it has been investing in Britain for decades.

What are some of the plans that emanate from the vision of His Highness the Emir of Kuwait, Sheikh Sabah Al Ahmad Al Sabah?

The Emir’s reasons for his vision arise from his desire for “content residents and vibrant, sustainable communities”. If I may, I would like to quote his exact words. His Highness’s vision is to transform Kuwait into a “financial and trade centre, attractive to investors, where the private sector leads the economy, creating competition and promoting product efficiency, under the umbrella of enabling government institutions, which accentuates values, safeguards social identity and achieves human resource development as well as balanced development, providing adequate infrastructure, advanced legislation and inspiring business environment.”

The envisioned direction sets areas of focus and determines the plans and projects to achieve the desired state for Kuwait and its inhabitants. The plan’s structure follows a clear cascading process, from the national vision, to specific areas of focus down to supporting programs and projects. This process will focus and unify development efforts in Kuwait towards achieving common goals that serve the greater good of the nation. The Emir’s vision is articulated into three developmental areas economic, human and societal, and public administration. These areas lead to five strategic objectives and seven pillars that represent the drivers that Kuwait’s various institutions (executive, legislative and judicial) can use to achieve them. These pillars are administration, economy, infrastructure, living environment, healthcare, education and international positioning. 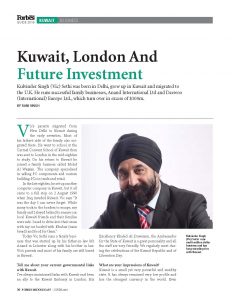 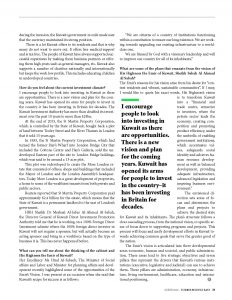