A Brush with Royalty

On Thursday, April 13 Her Majesty The Queen, accompanied by The Duke of Edinburgh visited Leicester and its Cathedral to complete her Maundy visits to the English Anglican Cathedrals.

The Royal Maundy Service is a tradition from Medieval times when the Sovereign washes the feet and gives alms to the poor. This is a service of the Chapel Royal and this year the event was hosted in the Leicester Cathedral led by the Lord High Almoner with music that included singing from the Chapel Royal Choir.

Upon hearing the news that the Queen was coming to Leicester for the Maundy visit, Vic decided to contact the Cathedral to support the royal lunch for all the guests attending.

They royals arrived in the morning by car and entered the city at Humberstone Gate and travelled past the Clock Tower and along High Street to Jubilee Square. Some of these sights may have been familiar to The Queen who last visited Leicester in 2012 when she was here to begin her Diamond Jubilee tour of the UK.

On this more recent visit, they took part in the parade and The Queen handed out Maundy Money to 91 men and 91 women, chosen in recognition of the service they have provided to the community and church. This tradition dates to the 13th century and each recipient received a red purse containing a £5 coin, commemorating the Centenary of the House of Windsor and a 50p coin which commemorated Sir Isaac Newton. The Queen also handed out a white purse which contained traditional Maundy coins. The coins equated in pence to her age.

On this sunny day, the Queen wore a lovely dark jade green dress, matching coat and hat created by her trusted designer and senior dressmaker, Angela Kelly. She was greeted by the Dean, Bishop and Almoner (Bishop John Inge from Worcester). She was then introduced to the Cathedral Canons and then proceeded to the prepared seats in the sanctuary.

“We met her at the Dean’s private reception and she was so approachable. We were introduced to Her Majesty by the Dean and we had a great conversation with her about various things including our dinner experience at the Palace with HRH Prince Charles and HRH Princess Camilla. The Queen had great charm and looked so elegant and comfortable.”

After the service, Her Majesty The Queen and the Duke of Edinburgh were the guests of honour at the lunch hosted at the Grand Hall in St Martins of The Leicester Cathedral supported by the Anand and Sethi families of Leicester.

were just some of the items on the lunch menu at St Martin’s House.
“I was very grateful to Dean David Montieth and Claire Rederon for giving me the opportunity to support the royal lunch and a private meet and greet with Her Majesty.”

Vic Sethi has worked with the Cathedral since the reburial of King Richard III and his name appears in the Founding and Donors list of the King Richard III’s appeal.  Vic was also appointed as the Cultural ambassador of the Leicester Cathedral by the Dean in 2015 and continues to promote the work of the Cathedral during his worldwide travels.

Born into a Sikh culture in Delhi, Vic grew up in Kuwait and was educated in a convent school through his parents’ choice so that he and his siblings could grow up in a multi-cultural society to respect all faiths and look at everyone as one equal entity.

He came to the UK in 1991, during the invasion of Kuwait by Iraq. He went on to marry a few years later and moved to Leicester along with his wife and joined his father-in-law, Mr Anand, founder of Anand International Ltd, a very successful distribution company. Mr Anand was well-known and very reputable in the community. Vic & his brother in law Harjot (Jay) run Anand International along with their uncle Babu.

Vic along with the family is a great believer in giving back to the community and has contributed and supported his time to various events. He is very passionate about Leicester and is a proud local who believes that it’s a vibrant city where people live in harmony and peace and interact with each other wonderfully during the city’s numerous events and cultural activities. 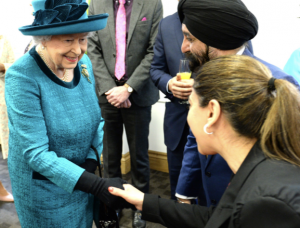