On February 22nd, almost 80 Kuwaiti Students in Leicester celebrated the Kuwait Liberation Day with a Reception at De Montfort University.

The event was organised by the president of the university’s Kuwait Society, Mr Mohammad Al-Azmi and supported by Leicester businessman and entrepreneur, Vic Sethi.

Vic migrated from Kuwait to the UK during the invasion of Iraq. When he realised there was a DMU Kuwaiti Society in place, through social media, he approached Mohammed Al-Mutairi, Mohammed Al-Azmi, Yousef Adnan, Khaled Al-Shamari, Mohammed Al-Adwani, amongst others.

Vic, who promotes Kuwait locally and nationally, invited the High Sheriff of Leicestershire, Professor Surinder Sharma and Mrs Vijay Sharma to join the reception and meet the students.

Professor Sharma welcomed each of the students to Leicester and extended his support to them during their stay in the city and beyond. He told them that they are the future of their country and should work hard in achieving their degrees.

Manish of KDM Studios took photos of the event and provided framed pictures of the Emir and the Crown Prince of Kuwait. The society and Vic arranged the Indian food for the evening with a number of tasty Arabic dishes and drinks.

The society’s president honoured Professor Sharma and Vic Sethi for all their support and joining them. Kuwaiti students from Sheffield, Coventry, Bristol and other cities also attended the event.

Students from Bahrain, Oman, Yemen, Qatar, Dubai and Saudi, amongst others, joined in to congratulate the Kuwaiti students.

The event started off with verses from the Quran followed by the Kuwait National Anthem.

There was also a speech by Vic Sethi on life in Kuwait from the early 70s and his time during the invasion. A fun quiz session was held where prizes were awarded to the winners.

Kuwait is the fourth richest economy per capita in the world. It is the smallest oil-rich state that borders Saudi Arabia, Iran & Iraq. It is a 100% tax-free country and holds the most powerful currency in the world which is the Kuwaiti Dinar.

The population of Kuwait is around 4.5 million, while the highest population of expatriates is the Indians and the Egyptians. There are just over 1.6 million between the two nationalities living in Kuwait. 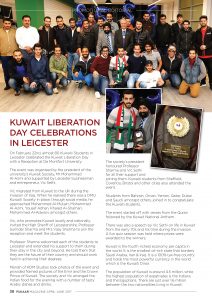