His Highness Sheikh Talal Al-Fahad Al-Sabah is the son of the great Sheikh Fahad Ahmad Al-Jaber Al-Sabah who was the founder of the House of Sabah and the Kuwait Olympic Committee. He died fighting alongside the Kuwait Emiri Guard Brigade in defending the Dasman Palace in August 1990.

Sheikh Talal Al-Fahad Al-Sabah is a family member of the ruling party of Kuwait and is the nephew to the Emir of Kuwait, His Highness Sheikh Sabah Al-Ahmad Al-Jaber Al-Sabah. He came to the UK for major surgery and with the grace of the Almighty, he has recovered fully and is planning on travelling back to Kuwait in a few weeks.

Vic Sethi grew up in Kuwait in the 70s and is a passionate supporter of the country. Vic had decided to meet up with Sheikh Talal Al-Fahad to congratulate him for his speedy recovery in person. The Royal family members have always been known to be very humble and welcoming. On the way to his residence, Vic met up with Sheikh Talal’s family and friends.

As soon as Vic arrived at his home, he was introduced to his son Sabah by Mr Masoud Abu Marzouq. Sabah greeted Vic with a warm welcome and thanked him for coming to meet his father. He asked Vic about the time he lived in Kuwait: “He was so welcoming and made me feel at home, it felt as though we had known each other for ages,” said Vic. Upon entering his residence Sheikh Talal Al-Fahad met Vic with a smile and a warm Kuwait style hug:

“I was so pleased to see our Sheikh Talal in great health and fully recovered. Seeing him in good health gave me that extra comfort.”

Vic discussed his life in Kuwait as a child and spoke about Leicester and requested him to visit his hometown when possible. Vic explained there are around 100 Kuwaiti students studying in Leicester and they would be so pleased to see him. Sheikh Talal is a role model to so many Kuwaiti’s and they have so much regard and respect for his father, the Late Sheikh Fahad Ahmad Al-Jabar Al-Sabah, who gave his life for the country and will never be forgotten.

Sheikh Talal Al-Fahad said that he will try his best to visit Leicester before he travels back to Kuwait. Vic said that he would be delighted to show him around the city including a lovely meal in Leicester: “I am looking forward to Sheikh Talal Al-Fahad’s visit and am also very grateful to my friend Sheikh Sabah Faisal Duaij Al-Sabah, Mr Ambar Al-Faisal Al-Mutairi and Mr Masoud Abu Marzouq for all their support. I would not be where I am today in life if it wasn’t for the support Kuwait has offered me and my family.” 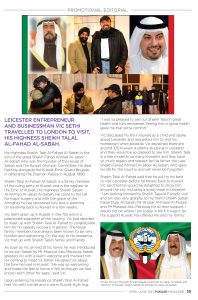